I’m not a massive fan of Mind Mapping, a “hierarchical way to diagram and visually organise information that shows relationships among pieces of the whole”, but before Christmas I found myself blocked and unable to gain traction on a small research based side project. After idling for an uncomfortable duration I tried a few alternative approaches and Mind Mapping appeared to be a decent fit so I decided to install a tool and break my block with it. Then the Yak Shaving began.

It’s been a very long while since I last created a Mind Map and at the time Free Mind was the tool of choice. I naively expected to run a quick dnf install freemind and be happily on my way. There’s even a Fedora Magazine Mind Mapping post on it. Unfortunately a number of distributions have dropped it as a package due to a lack of activity and I had to go looking elsewhere.

With the non-negotiable requirement that whichever tool I used had to be packaged and available, due to needing it on multiple machines, I installed a few alternatives, such as Labyrinth, minder and kdissert, before discovering View Your Mind (VYM). 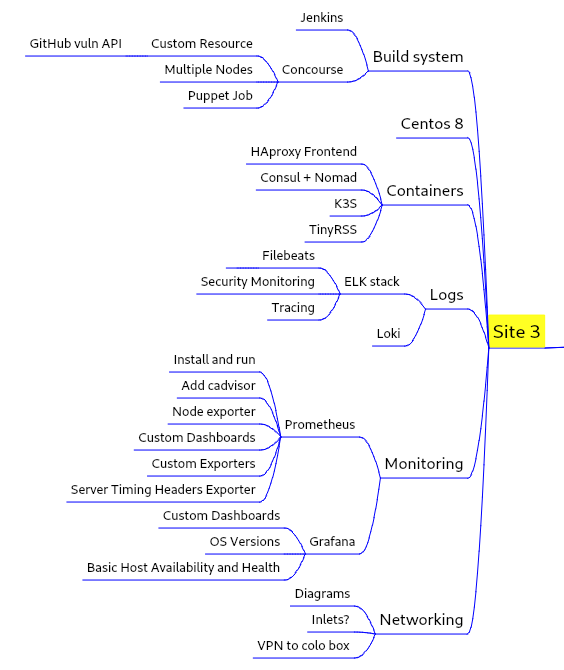 I settled on View Your Mind over the others for a few reasons, the biggest factor for me is how keyboard friendly it is. All the others I tried (with my huge testing time of 10 minutes each) seemed to want me to keep one hand on the mouse and when I’m essentially adding and editing text that’s undesirable. Other positive things include the actual mind map looks fine and it can be exported to a number of formats, including structured text.

This functionality enabled me to do something that is probably a niche inside a niche but for my side project I ended up needing to represent a large part of the mind map as trackable items. So I wrote a small, horrific, script to convert the top level branches into Trello columns with cards under their respective section and labels representing each of the intermediate hierarchical levels. It was an entirely one way operation but being able to get to the data in a plain text format at least made it possible.

The amount of usage you’ll get with mind mapping techniques will obviously vary but I’d recommend experimenting with them and a few topics so you at least know enough about the area to see when it would be of benefit. And when you do it digitally VYM is an excellent place to begin.