As a young teenager there was a local second hand bookshop I’d frequent and develop what seems to be an ongoing interest in science fiction and fantasy books and Marvel comics. They didn’t have a massive selection of the first two but over the years I managed to stumble my way onto some of the classics such as Arthur C. Clarke, Asimov and Mercedes Lackey. The ultimate doom of my limited pocket money was the timing of my first Forgotten Realms (FR) novel, Spellfire, and the creation of an Advanced Dungeons and Dragons (2nd Edition) group at school.

Over the next few years I’d grab nearly every FR book that went through that store and on special occasions, such as birthdays, I’d go all out and actually choose a brand new paperback or two from Forbidden Planet on Tottenham Court Road. Due to the spotty availability of second hand books I’d often read the first part of a trilogy and then wait a year or two for the other parts to arrive. I also gained the habit of buying the later parts of a series, which were often cheaper, and hope to one day fill in the gaps. Halfway through my teens I’d built up quite a collection until, and this may sound quite Wizard of Oz but it was much less interesting than that, a chunk of the roof of the house I was staying in was damaged in a storm and a large amount of water pretty much destroyed everything I owned.

After the disaster and the loss of my collection I gave up on DnD and it’s related books. Over the years I moved on to other authors but stuck with the genre. Pratchett was a mainstay and I’d eventually end up working with bob and be given enough new names to read that I spent years catching up. My reading dropped off a lot when I worked from home while at Mozilla and when I changed role to my current job (coincidentally to work with bob again) I suddenly found myself with a few hours each day to kill while commuting. And in a moment of naive foolishness I decided to start re-reading the Realms.

It’s been a couple of years now and my spreadsheet informs me I am 169 books into about 296 titles. If I’d know there were that many when I started I doubt I’d have embarked on this adventure. I’m mostly reading them via kindle, as I don’t have the space to store that many books, and I’d be worried about the roof collapsing again to spite me, but I’ve had to hunt down some paperbacks via eBay and Amazon market place where electronic versions are not available.

There’s an odd sense of completion re-reading and then finally finishing trilogies I’d started decades. In a few cases I’ve even read the first book in a series I’d otherwise completed, which I’m pretty sure isn’t how this is supposed to be done. While there have been a few other novels, Laundry Files spring to mind, that I’ve stopped reading at the expense of this list I’m honestly not sure if I’d be able to come back to this if I stopped. While there are some amazing Ed Greenwood, Elaine Cunningham and Richard Lee Byers novels there is an awful lot of rubbish I’d have baulked at even in my early teens. Still, I’ve enjoyed more than I’ve disliked and there is something reassuring about not needing to wait for the next part of a series to be written and published.

I have recently run into a bit of a diversion while looking for some harder to source books from my list. Over the last 10 months I managed to snag the entire set of Spelljammer novels. 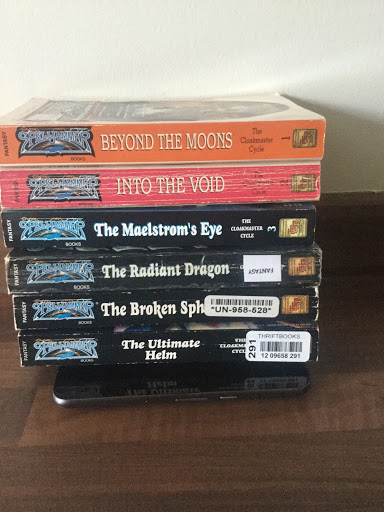 I’m very tempted to take a tiny break and read those but I’m a little worried that once I break free I won’t return to the pile. Also, I’d probably be fine if I never read another Drizzt Do’Urden book.